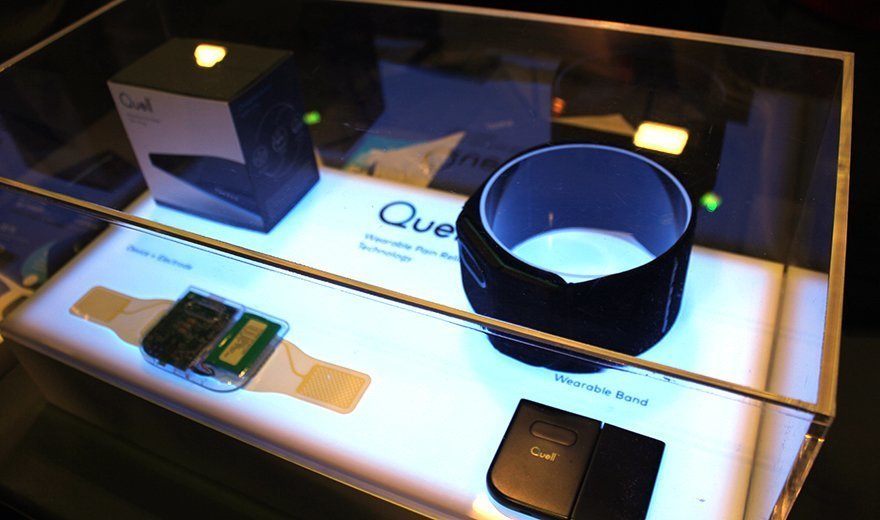 Quell is an FDA-cleared, class II wearable medical device created by NeuroMetrix that is drug free and helps to manage chronic pain. The device is worn around the calf and taps into the central nervous system.

More cool tech from @connectedhealth! Here is #WearableTech from @Quellrelief! @SearchHealthIT Wear it on your leg! pic.twitter.com/ZOTnbWRSsJ

"The device is customized to your unique needs. There's an algorithm in it that will detect what therapy you need," said Frank McGillin, senior vice president and general manager of consumer health at NeuroMetrix in Waltham, Mass. "We're delivering a systemic response in a way that's very discrete and individualized."

And then therapy is tracked through a companion application, McGillin explained.

In order to stop the pain, the device stimulates the nerves in the calf, triggering a response in the brainstem which then releases opioids that block the pain, McGillin said. "And it's all done pretty much behind the scenes from a consumer standpoint."

A clinical study showed that the use of Quell resulted in an 81% improvement of chronic pain in overall health, according to the company. Furthermore, two-thirds of the study's participants said they reduced their pain medications. NeuroMetrix started shipping its product in June and since then has shipped 7,000 Quell devices.

"This is a product that some patients or some people will live with 24/7," McGillin said. "We knew we needed to fit with their lives, we knew that the app needed to be very intuitive [and] we didn't need a lot to buttons We wanted to make sure that once you had Quell on, you could basically set it and forget it."