BOSTON -- As the U.S. House of Representatives voted on H.R. 4302, the latest in a series of annual bills to patch Medicare reimbursement and prevent it from dropping 24% on April 1, the health IT community watched closely as it included verbiage tacked on at the eleventh hour that would delay federal ICD-10 implementation for at least a year. The bill passed the House by voice vote after first failing because of a lack of quorum. The Senate will likely vote on the bill Monday.

Panelists convened by Nuance Communications Inc. to discuss the intersection of IT and medicine parsed the rapidly evolving possibility that -- if the Senate and President go along with the plan -- ICD-9 will remain the diagnosis coding language in U.S. healthcare until October 2015 and perhaps beyond. The plan would override CMS administrator Marilyn Tavenner's repeated statements that ICD-10 would not be delayed past this coming October 1, despite vigorous protests from the American Medical Association (AMA).

Beth Israel Deaconess Medical Center CIO John Halamka, M.D., said a delay would be a mixed bag from an IT point of view: On one hand, his budget has no extra funding to accommodate an ICD-10 delay and the concomitant costs new plans would incur. On the other, it would buy more time to more fully implement ICD-10.

Specifically, he said that ICD-10 implementation for Beth Israel this year would look more like ICD-9 codes mapped to ICD-10. Given more time, he said that the health system would be able to put in place more programs that would start with ICD-10 codes, with the more detailed clinical documentation required to support them. He acknowledged that he spoke from the perspective of a hospital that may have the ability to roll with the punches and that small, primary care practices aren't ready for ICD-10.

"The hospitals of America have invested vast sums to get ready for October 1, 2014, and we have a run rate on project teams and consultants, so a year delay is something we haven't budgeted for, and it could cause a problem," Halamka said. "But if I had a delay, I would end up linking problems, documentation and bills in a much better way."

Halamka, who spoke with SearchHealthIT prior to the panel, called the ICD-10 delay a late "distraction" to the overall Medicare bill and wondered if it would eventually be removed before Congress addressed the larger reimbursement issue. After the panel, former AMA chair and practicing Lexington, Ky.-based physician Steven Stack, M.D., also discussed the bill and ICD-10. Both have been involved in ONC advisory committees that help shape national health IT policy.

The AMA, Stack pointed out, isn't opposed to ICD-10 per se, and it acknowledges that ICD-9 is obsolete. The U.S. implementation of ICD-10, he said, is the problem. There are too many codes, and while some physicians only use a small subset of ICD-10, generalists such as his specialty -- emergency physicians -- will use many of them. Some codes require such detailed documentation that it would impair physicians' ability to practice in fast-paced healthcare environments. 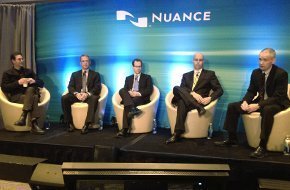 Stack thought the lateness of the addition of the ICD-10 language took focus away from the bill's larger issue, the need for a permanent patch for Medicare reimbursement so Congress doesn't have to renegotiate it every year. Physicians, he said, are grateful that both parties' leadership in the House and Senate appears to be working toward that permanent reimbursement fix, whether it gets done this year or in the near future.

"The ICD-10 issue is a legitimate concern; we need to address it," Stack said. "[I don't know] why it got mixed into a bill that had nothing to do with the merits of ICD-10 -- it was a blurring of issues."

Adam Landman, M.D., one of three chief medical information officers for Brigham and Women's Hospital, said he hopes for a day where ICD-10 coding is a software background process physicians don't have to worry about. Today's IT systems and, in his case, outsourcing to medical coding companies can reap some time savings, but not all physicians have the luxury of those resources.

In the future, though, natural language processing linked to speech recognition may provide that technological bridge to treatment details that coding languages require downstream from physicians in the billing process. Whether it's ICD-9, ICD-10 or whatever's next, he sees innovation opportunities for healthcare technologists.

"This gets to a larger question, too: The billing system needs to change," Landman said. "We spent an inordinate amount of money on the billing and coding infrastructure. Shouldn't that be going into patient care and not into those supplemental activities?"