This content is part of the Essential Guide: Guide to business intelligence and health IT analytics
By

In the mind of Karen DeSalvo, M.D., the value of health IT and EHR systems became painfully obvious in the aftermath of Hurricane Katrina in 2005, which destroyed many paper patient records and made treating patients extraordinarily difficult. The power of data analytics was made just as clear to DeSalvo in 2012 after Hurricane Isaac, when she was serving as New Orleans Health Commissioner. Her agency combined its own databases with CMS's and a power utility's. Together, they directed emergency responders to bring electricity online for the most medically vulnerable populations first.

We introduce readers to DeSalvo, now National Coordinator for Health Information Technology, in SearchHealthIT's first one-on-one, just days after ONC proposed a rule offering new flexibility for eligible hospitals and eligible physicians in attesting for meaningful use. This interview took place hours before DeSalvo announced an ONC reorganization streamlining 17 offices and sub-offices into 10. Here is the first installment of excerpts. The second part is here.

On how her still-new job's going: 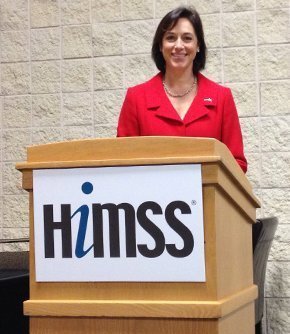 National Coordinator for Health IT
Karen DeSalvo, M.D., at HIMSS 2014.

Karen DeSalvo: It's been four and a half months. It's been great. I say [four and a half months to point out] it's still pretty new in some ways, getting to know a lot of our important stakeholders and partners and working to meet with every single person at ONC so I can have a chance to understand the depth and breadth of the work the agency's involved in. It's been a lot of fun getting a chance to know who's in the space and what great work we're doing.

On how her experiences inform policymaking:

DeSalvo: I was in public health for three years. When I was there, one of my jobs was to build a hospital. I was the lead for that project, and it included an IT purchase -- so just before I came here I was involved with selecting an IT system for the hospital, a small, 80-bed facility, on the purchasing side. I'd implemented this system [as CEO of Tulane] Community Health Centers but it was obviously less complicated than buying a hospital-based system. And of course I've used [EHRs], because I still practice medicine. I've seen it from a lot of angles, and this is just a different view, of the true policymaking arm of ONC in partnership with CMS.

Before [I was in] public health, as we were rebuilding the healthcare system in New Orleans and setting a policy framework, IT was one of the four pillars necessary to build a system that would serve patients' needs, and that of the providers. It's always been a part of the world we were building, from a policy standpoint or on the front lines. So although I'm not a techie person, I do come with a lot of technical exposure in my background and I'm delighted to have the chance to lend that perspective to the work we're doing for ONC.

The patient voice is a powerful one, and there's research to show that patient-reported outcomes are great substitutes and additives to the quantitative objective measures we might traditionally think of.

DeSalvo: Meaningful use is a program designed to offset the costs of adopting certified electronic health records, help advance healthcare and eventually help advance outcomes. There was some evidence that suggested the market wasn't ready for full upgrades and this may disproportionately impact smaller, rural critical access providers through no fault of their own. We thought it would make sense to put out this [proposal] that would consider whether there could be some flexibility for those providers.

We still want people to progress to better technology that is more inclusive of, for example, the patient voice and allows for transitions of care. But we felt like [a proposal] speaking to some flexibility right now would make some sense.

Where the idea to give providers flexibility on using 2011 and 2014 CEHRT to attest for meaningful use came from:

DeSalvo: ONC is constantly surveilling the environment. Not only ONC but also CMS, HIMSS [and others] so there's a constant level of information gathering and sharing about the market. We were hearing from major stakeholders that there were some challenges. It looks like the certification process was going well, but there may very well have been some vendors who weren't quite ready. We were hearing that [at federal advisory committee meetings], in public comments and in other ways.

Did CCHIT leaving the ONC EHR certification program complicate the meaningful use rollout?

DeSalvo: CCHIT was incredibly professional about letting us know they were moving out of the space, changing their business model and [partnering] with HIMSS. They had a queue of where they were in their certification; they were working already to do appropriate handoffs that would not allow for any skipped beats, so we felt pretty certain it would not have an impact. They were thoughtful about their transition, so I have to say it really was not a major factor and there is plenty of opportunity for EHR certification in the marketplace.

On the potential for "partial credit" for meaningful use payments for providers who meet most, but not all, of a particular stage's criteria:

DeSalvo: We are absolutely taking ideas like that into consideration, moving forward, especially with meaningful use stage 3 in particular. But there are constraints with the way the law is written. We're in this heavy listening phase [with advisory committee hearings] to get broad feedback. We're getting letters and other input from folks as we start to move into the quiet phase of stage 3 development. We certainly appreciate those kinds of ideas.

How "big data" can change patient outcomes through health IT:

DeSalvo: There's great promise in what we can do with information, whether that's to improve systems around quality and safety or whether it's to advance science and/or cure and treatment for individuals with genomics at the bedside all the way to population-level advancements. There's an array of opportunities for use of the data. At the end of the day, it's the patient's data ... and we have to get ahead of the privacy and security challenges that are going to arise as big data gets more common.

[The recent White House report on big data] speaks to some of these challenges. There's a list of things we have to consider. We have the opportunity to collect all kinds of data on all of us. The patient voice is a powerful one, and there's research to show that patient-reported outcomes are great substitutes and additives to the quantitative objective measures we might traditionally think of. It's really important [to] remember it's about them. Their voice matters and it contributes to the trajectory of their health in a way that retrospective and even current data can't. Creating space for that, finding standardized ways to capture that [patient perspective] is another challenge, but I don't want us to lose sight of it and just analyze what we have at hand.

Dig Deeper on HITECH Act and meaningful use requirements