Even the vice president of the United States isn’t exempt from experiencing information blocking.

At the Health Datapalooza conference in Washington, D.C., Vice President Joe Biden told the crowd how his son battled a brain tumor and about a “last ditch treatment… where [doctors] injected a virus into the tumor in [my son’s] brain” when MRIs of his son’s tumor were needed.

“We couldn’t get that information from Walter Reed [National Military Medical Center] where he was at the time back to MD Anderson [Cancer Center] because the systems couldn’t talk to one another,” Biden said. His son, Beau Biden, died in May 2015 at 46 years old. 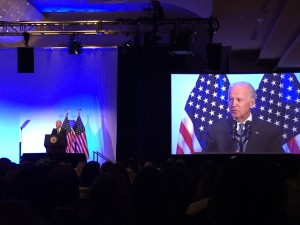 Information blocking appears to be emerging as a major theme at this year’s conference, in addition to the issues of value-based care and improving EHRs.

“The U.S. healthcare system is probably the most screwed up part of our economy,” John Doerr, a venture capitalist at Kleiner Perkins Caufield & Byers in Menlo Park, Calif., and a member of the President’s Economic Recovery Advisory Board, said during a Q&A. “The patients, the providers and the payers are not linked in any rational or functioning economic system.”

Burwell noted the adoption of EHRs has tripled. However, she acknowledged that when it comes to EHRs, “it does not always work the way that it should,” adding that “often [data] cannot move from one system to another” and “hospitals don’t want patients to access data for business reasons.”

Cassidy shared a personal story of information blocking. When his mother had an X-ray done, the hospital said she needed to get a disk copy of the X-ray images and physically bring it to other physicians to share the information between providers.

“The promise that we have spent billions on… none of that is happening,” Cassidy said. “Isn’t that remarkable?”

Cassidy added that “much of what we do has little meaning to patients” and said he thinks the healthcare and health IT communities need to start thinking less about what software works for the big health institutions that allegedly are data blocking and think about what works for patients.

Burwell stated that three things need to happen to fix this problem: