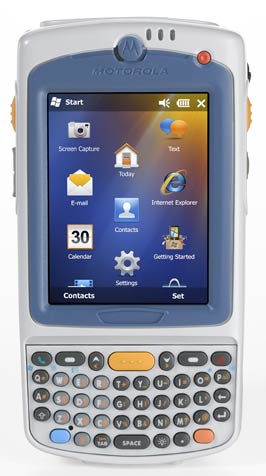 Today, Motorola Inc. released the MC-75A0-HC, an enterprise digital assistant, or EDA — basically, its name for its line of ruggedized personal digital assistants (PDAs). The device comes with such health-care-friendly features as security that complies with the Health Insurance Portability and Accountability Act, or HIPAA; a bar code scanner for bedside medications; and a sealed case that can withstand the germicidal cleaners typically used in hospitals.

It’s not a cell phone, but it can plug into two-way, push-to-talk systems, as well as into Voice over Wireless LAN, or VoWLAN, phones — essentially wireless Voice over Internet Protocol (VoIP) phones — that many hospitals have either integrated or plan on integrating.

The new EDA is one way of promoting the convergence of the many devices a nurse might carry: beeper, bar code scanner, walkie-talkie, VoIP handset and PDA, said Vivian Funkhouser, Motorola’s health care lead. It fits somewhere between a smartphone and tablet, feeding patient data into inventory, e-prescribing and electronic health record (EHR) systems.

“Nurses demand, at the point of care, ruggedness because of their workflow,” Funkhouser said, adding that a device’s owner determines the ruggedness required — that is, doctors and nurses take much better care of personal devices than they do of shared devices owned by the hospital.

Funkhouser charitably calls the cluster of devices that hospital health care providers typically use to access EHR systems a “hybrid hardware workflow.” And while there might be some confusion as to which devices are best for which workflow functions — smartphones versus tablets versus laptops, and so forth — she credits nurses and doctors for pushing EHR vendors to adapt their applications to mobile computers.

“About five or six years ago, the clinical [EHR] providers, whether they were the Cerner, McKesson or Meditechs of the world, used to tell the hospitals’ IT and nursing [departments], ‘This is what we built the application on, this is what you get. Take it or leave it,'” Funkhouser said. “As the health care providers, IT folks, nurses and physicians have become more savvy with technology in their personal lives, they have put the demands on the clinical vendors” to port their apps to more than just PCs.